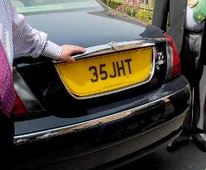 Politicians usually make the headlines for negative reasons but Councillor Jefferson Tildesley was able to prove that his word was his bond – even after 51 years! That promise was for a personal number plate and the seller’s unusual condition of sale.

Councillor Tildesley was looking for a personalised number plate in 1965  for a 21st birthday new car.

“My birthday is July 4, but HT was then issued in Bristol, so I spent a week searching scrap yards with no success at all. One day, I was visiting Port Talbot steel works on the change of shift. At 1.45pm I spotted a Riley 472, personalised number plate 35 JHT. I followed the driver into the clocking station to discuss buying his plate, and I was shocked to discover that he too lived in North Cornelly.”

Its owner was Mr Jack Godwyn and when they met to discuss the sale, he and his wife had an unusual stipulation that there would be no charge at all, but Mr Tildesley had to promise he would never sell it!

In the intervening 51 years, the memory of that transaction had, not surprisingly, faded somewhat – until just three weeks ago, when Councillor Tildesley accompanied the Mayor of Bridgend County Borough, Councillor Reg Jenkins, to a care home, Morgana Court, in South Cornelly.

“To my shock and amazement, I spotted someone I thought was Jack Godwyn, and staff confirmed it was him – now aged 95. We agreed that we should take a photograph of Mr Godwyn with my car – 51 years after giving me the number plate – I really thought he had passed away some years ago. I now have a record of the deal which includes Mr Godwyn together with the car!”