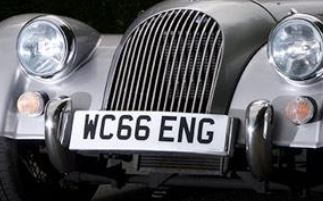 Included is the number plate WC66 ENG which is a reference to England winning the World Cup and has been released almost exactly 50 years since the day, in which West Germany was beaten 4-2 on the 22nd of July, 1966.

It is being auctioned as lot 1,368 and is likely to fetch a pretty penny during the three-day auction at the Morgan car manufacturer factory in Malvern.

“We wanted to commemorate England’s World Cup win of 1966 in some way and then, after researching the possibilities, we discovered the WC66 ENG new-style combination was available,” said Adam Griffiths of DVLA Personalised Registrations. “Hopefully, it will find its way to a fan.”

Other private number plates will go under the hammer, including NES 511E, ART 115T, DR12 AKE and FL11 OYD for anyone with the name Floyd or a fan of Pink Floyd.

Check out our auctions page for a complete listing of plates offered for sale.