Personalised Number Plate Sales Are On The Rise! 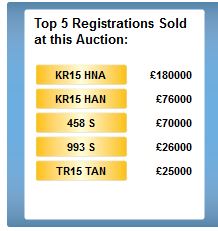 More Britons are personalizing their car number plates than ever before, according to the Driver and Vehicle Licensing Agency (DVLA). In the past year, the Treasury made a record total of £102 million — £15 million more than 2014-2015 from an estimated 335,000 registration plates purchased by drivers in the U.K.

The DVLA started selling personalised number plates in 1990, with just 77,745 purchased between 1995-96 — four times less than today. At present, the DVLA boasts 47 million plates on offer to drivers across the country, which can be bought online or at auctions.

The DVLA says almost 335,000 registrations were sold in the last year – more than four times the figure in the mid-Nineties.

A spokesman for the AA welcomed the news, saying: “It puts a smile on people’s faces and raises money for the exchequer – what’s there to complain about?

“Once you’ve bagged that number plate – if it’s a good one it adds value to it. Some are iconic and will be sought after. Some of the best are simple but exquisite.”

The biggest went for £180,000 in May last year – for KR15 HNA – which was a new British record for the most expensive current style personalised registration plate.

A DVLA spokesman said: “Many people enjoy displaying a personalised registration number and the general sale and auctions remain extremely popular with the public.

“Since we began selling personalised registrations we have raised around £2.3 billion and all the money raised is passed to the Treasury.”