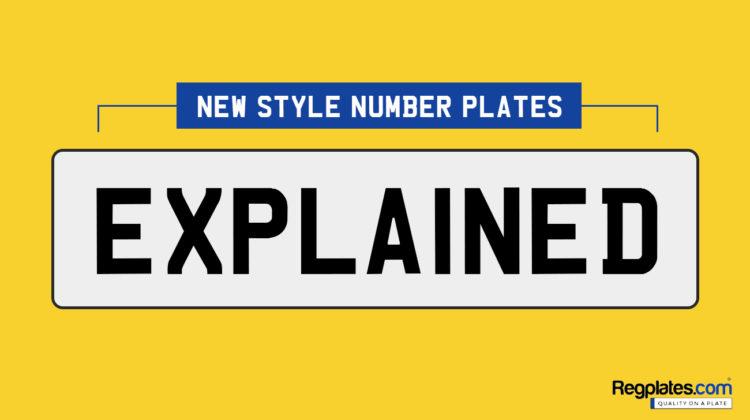 The number plate format we currently use (as of 2020) was introduced in September of 2001. This new format brought a significant change over the previous style that was developed during the 1960s. This most recent format is now being used across the whole of the UK and is officially administered by the DVLA (Driver and Vehicle Licensing Agency.) In this blog, we’ll explain the new style and how to understand what it means.

Why was the new style introduced?

Firstly, why did we need a new style of the number plate in the UK? One of the main reasons was so that it would be simpler to identify the age of a vehicle. Another reason was that the new system makes it easier for drivers to remember the number plate if a vehicle is involved in an accident; that is according to Lord Whitty, transport minister at the time. This was because it featured geographical and age identifiers as well as 3 random letters. This meant you could tell the general area a car is from just from the number plate.

Also, at the time, the RAC suggested that drivers with number plates created pre-2001 were able to easily obscure their registration mark to speed cameras. Therefore, enforcing a standard style of typeface ensured that number plates could easily be read by digital speed cameras.

This new system of number plates was designed to be flexible enough to use for future years as it changes twice annually, alternating from number to letters expanding the life span of the current style.

How to read the current number plate style

As mentioned, the new style of number plates, known as Infix has been issued and in circulation since 2001 and it consists of 3 different sections. These are;

A geographical identifier – The first 2 letters allow you to identify where the vehicle is registered. The first letter is for the region, i.e. Y for Yorkshire, the second letter is then for the DVLA office where it was registered i.e D for Doncaster.

An age Identifier – The next 2 numbers allow you to identify the age of the vehicle. This is changed twice annually at the beginning of March and September. March is represented by the year, i.e. 20 for the year 2020 and September is the year plus 50, i.e. 70.

A final random Identifier – The 3 letters at the end of the plate are completely random and, in combination with the others, provide the vehicle with its own unique identity.

What are the previous styles of number plates?

Between August of 1983 and August of 2001, before the infix style was released, newly registered vehicles were given a prefix style number plate. These consisted of a letter to identify the vehicle age, found at the beginning of the number plate i.e A, this is then followed by either, one, two or three numbers and then three letters to represent it’s registered location, excluding the letters I, Q and Z.

In mainland Great Britain, these were issued to new vehicles prior to February 1963 when the suffix style number plate was added into circulation. One of the most popular styles of cherished plates, they can be added to any vehicle regardless of its age. It can consist of up to three numbers followed by up to three letters, or vice versa. The maximum number of characters is six and this style of number plate, does not contain a vehicle age identifier, hence it’s name.

We specialise in all personalised and cherished number plates. Reg Plates have over 25 years of experience buying and selling private registration plates and are a DVLA Recognised Reseller. Reg Plates are renowned for our superb customer service and as an established dealer, we offer value for money and a service that is second to none.