The 19 Best Christmas Driving Songs for 2019 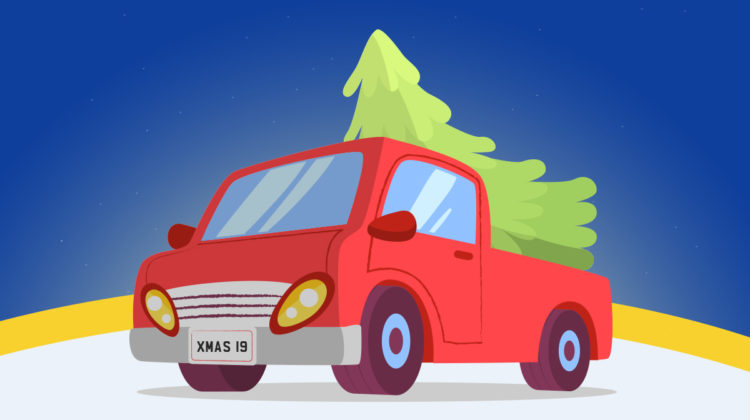 It’s the time of the year where we dig to the back of the glovebox and brush off the old Christmas CDs ready to get in the festive spirit. Over the years, there have been many Christmas driving songs released and we all have our own opinions and preferences on which are the best. In this blog, we’ve come up with our 19 favorite Christmas driving songs that you can’t have Christmas without and are sure to turn your car into a festive winter wonderland. We’ve included links to the Youtube version of each song so you can listen along as you find out some interesting facts about each of the singles. Enjoy!

This single was released on December 9th 1963 after being written by Brian Wilson of the Beach Boys during a date. It reached number 3 on Billboard magazine and 25th on Billboard’s US Holiday 100 in 2017.

2. With Bells On – Kenny and Dolly

As part of a collaborative studio album in 1984 by Kenny Rogers and Dolly Parton, the classic ‘With Bells On’ is a story all about someone promising they will be home with their loved ones for Christmas. A personal guilty pleasure of ours…

English rock group The Kinks released their Christmas song back in 1977, it tells the not so classic Christmas tale of a group of kids beating up a Santa impersonator. The song has been covered by bands including Arctic Monkeys and Green Day.

This Christmas classic was never actually intended to be a Christmas song. Originally made to be a protest against war, the brass band used and references to Christmas made it into a fitting winter classic.

Written by Bob Geldof and Midge Ure, this song was released during a famine in Ethiopia, 1983-1985 to raise funds. Staying at number one in the UK Singles Chart for a total of 5 weeks, the song raised £8 million within 12 months of its release.

A cover of the original song by Harry Belafonte, German disco group Boney M released their version in 1978. This version went on to sell over 1.87 million copies as of 2015 and has been covered several times since.

7. I Wish It Could Be Christmas Everyday – Wizzard

We all know the words to this one. Originally released in December of 1973 and later re-released with a new recording and choir in 1981, this song reached number 4 in the UK Charts.

Originally released in 1934 by Harry Reser, this cover was first recorded on the 12th of December 1975 at a live performance in New York as part of Springsteen’s Born To Run Tour.

Released in December of 1984, this Christmas classic was written, performed and produced by George Michael. Michael also played all the instruments in the track and the song reached number 1 in Denmark and number 2 in eight other countries. In the UK, Wham! was beaten to the number 1 spot by Band Aid’s ‘Do They Know It’s Christmas?’

Originally planned for release in 1984, but pushed back a year to avoid clashing with Band Aid’s ‘Do They Know It’s Christmas?’ this song was released in Christmas of 1985. Reaching the coveted number 1 spot in the UK Chart Singles, this song has since become one of the all-time greatest Christmas singles.

11. All I Want For Christmas Is You – Mariah Carey

This song quickly became a global success and still is to this day, reported to have earned over $60 million in royalties alone as of 2017. The single is also the twelfth best selling single of all time with over 16 million physical copies sold.

Originally written by Irving Berlin in 1942, the Bing Crosby version we all know was released in the same year and is currently the second best selling single of all time with a massive 50 million physical copies. Beaten only by Michael Jackson’s ‘Thriller’ this song will be played at Christmas for many years to come.

This winter single was released in 1974 and quickly became Christmas number one in the UK Singles Chart that year. Performed in the style of Elvis Presley, the song stayed at number one for a total of four weeks.

14. It’s Beginning to Look a Lot Like Christmas – Michael Bublé

Of course, this song written in 1951 has been covered by several artists throughout the years, including Perry Como and The Fontane Sisters and Bill Crosby. We’ve chosen the 2011 Michael Bublé version for our list as a modern take on the classic.

Extending on the classic ‘Jingle Bells’ this winter single was initially released by Bobby Helms in 1957. The song entered Billboard’s Hot 100 top 10 in January of 2019 for the first time and made is to 8th; something the song took over 60 years to reach.

The origins of this song are from Hollywood, California. The lyrics were written by Sammy Cahn and Jule Styne during a heatwave in July of 1945 – hence the lyrics ‘let it snow.’ There have been several popular versions including one by Frank Sinatra and Rod Stewart.

Reaching number 6 on the Official UK Singles Chart in 1693 and then reaching number 9 in 2017, this song still re-enters the charts each year and has sold well over 25 million copies to date. The first recording by Brenda Lee was done when she was just thirteen years old!

Beating Wizzard’s ‘I Wish It Could Be Christmas Everyday’ to the number one spot in 1973, this song was voted the 3rd greatest Christmas single of all time in a UK ITV special in 2012. Noddy Holder said in a 2007 interview that the song was produced to brighten up the mood at the time as the economy was in a bad state from miner strikes and alike.

And that’s it, our top 19 Christmas driving songs. We’re sorry if your favourite didn’t make the list and we’ll be sure to revisit this article in Christmas of 2020 to keep the festivities rolling.

We specialise in personalised number plates. Reg Plates have over 25 years of experience buying and selling private registration plates and are a DVLA Recognised Reseller. Reg Plates are renowned for our superb customer service and as an established dealer, we offer value for money and a service that is second to none.