A South Australia number plate is for sale and could fetch as much as $1 million. It’s one of the oldest ever to be sold at auction. 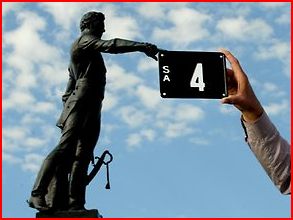 It’s a high price to pay for the historic item, which displays “SA4” on the pressed-metal plate, given it was issued by the State Government in August 1906 at no cost.

SA4 was registered by Dr A.M. Cudmore, who received it for his car, a French-made Darracq 8.

The car was used at his medical practice, then situated on North Tce.

But now, after more than a century in the Cudmore family, the piece of memorabilia is for sale.

Evans & Ayers Chartered Accountants consultant Ross Mathews, who is brokering the sale, said it would appeal to a collector.

“These plates sell interstate for over $1 million,” he said.

Number plates expert Stewart Kay, who runs the auction website, said the item was hard to come by. He believed it would sell for $500,000 to $1 million.