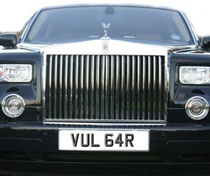 THE most iconic movie cars of all time also carry some of the priciest personalised number plates in the world.

And in some cases, the famous registrations are almost as well-known as the cars themselves.
So how much would these licence plates be worth if they hit the open market?

Experts at car dealer Peter Vardy have compiled the list of the best movie cars and their pricey plates based on similar sales in recent years.

Top of the list is ROBIN 1 from Magnum P.I. which has an estimated value of £256,100 – not far off the value of the Ferrari 308 GTS driven by Tom Selleck’s cool detective.

But if these are a little outside your price range, we’ve hunted through the upcoming September DVLA number plate auction to pick out a few movie-themed alternatives that you can bag yourself for as little as £300.

FAB1 might break the bank but this slight variation has a reserve of just £300.

That leaves plenty of spare cash in the bank to pay for your own Parker. It also works if you own a Skoda Fabia.

You might not have a Batmobile but you can pick up this £350 plate and pretend you’re Bruce Wayne in Gotham City.

Just make sure you’re not followed by The Joker or Harvey Dent on your morning commute.

The OUTATIME registration plate will never go on sale in the UK as it doesn’t meet the DVLA structure.

But if you want to pay subtle homage to Doc Brown why not pick up this for £250.

If your pockets are a little deeper, then this 488 DR plate could be the perfect Back to the Future option.

The Dr speak for itself but for proper fans the 88 will mean nothing other than the 88mph the DeLorean had to hit to time travel.

Any plate that links in anyway to James Bond and 007 is worth a pretty penny.

This plate is a snip at £400 – although it would only be fair to splash out on an Aston Martin for it.

Buying this plate should be elementary. Sherlock doesn’t own a car and prefers hopping in taxis to crime scenes.

If he did own a motor, though, we’re pretty sure he’d part with the money to get this as his personalised reg.

Hugh Jackman might have hung up his claws as Wolverine but not before he had one final outing in the smash hit Logan.

We’re pretty sure if he’s reading, he’s lining up a bid for this plate at auction.

Heart-throb Patrick Swayze and that pottery scene are enough to make any movie fan swoon – and you can get the plate to match for just £300.

Or, if Ghost isn’t your movie buy this plate and pretend you’re Jon Snow’s long lost dire wolf from Game of Thrones.

The Fast and Furious franchise holds records for the number of cars it’s smashed up and few remain in one piece long enough to warrant a personalised plate.

But Dwayne Johnson’s hard-hitting agent Hobbs is the sort of guy who’d want this plate – probably fitted to a ridiculously sized 4×4. And as The Rock is one of the highest paid actors in the world, he can likely stretch to the £350 reserve.

In fact, when the DVLA issues a car’s registration plate, they actually follow a very distinct system.

While it may look like a random combination, a number plate can actually tell you how old the car is and where it was registered.

A new format for registrations was introduced in September 2001, meaning all cars registered after that date would have their number plate made up of three parts.

How to tell where the car is from

The first section of a number plate is the local memory tag – the first two letters of the plate.

This identifies where the vehicle was registered, and is itself broken down into two parts.

The first letter stands for the local area, for example E denotes Essex, while L stands for London.

The plate’s second letter then identifies at which DVLA office in that area the registration took place – multiple letters can signify the same DVLA office.

The letters I, Q and Z are not used as local office identifiers, while Z can be used only as a random letter.