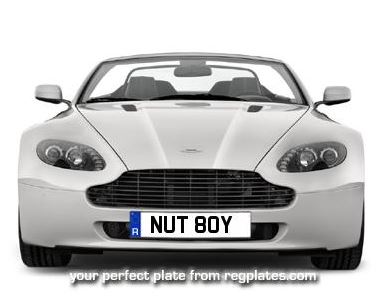 In the last year, £102 million has been spent by Brits on private number plates, bringing the Treasury’s income from personalised plates to a rather eye-watering £2 billion since the late 1980s.

This is the first time that sales of personalised number plates through the Driver & Vehicle Licensing Agency (DVLA) have gone above £100 million. Sales through private companies such as RegPlates.com, where car owners can buy and sell existing registration plates, take the total spend throughout the country on these items much, much higher.

Whether bought as a gift, as a treat to yourself, or as a hobby, private car number plates can have more benefits than simply adorning your car with a plate that is unique and stands out.

Often with a relatively small initial outlay, a personalised number plate can disguise the age of your car (although you are not allowed to use a number plate that suggests your car is younger than it actually is; this is against the law), it can be a statement of your individuality, a sign of prestige, and a private number plate can even promote your business!

However, personalised plates can also be an investment that could really pay out in the future.

While the cheapest private number plates on sale are most likely not those that will bring in cash in years to come, they can still bring pleasure to their owners, perhaps sharing their initials on their car for all to see. Yet the more expensive plates – those with first names, surnames, place names or words related to popular hobbies, or simply the earliest plates with just two or three numbers or letters on them – could bring in thousands more than you initially spent on them, if you can wait for them to rise in value over time.

One of the great benefits of number plates is that they are all unique. There will never be another one the same as yours, so if you can spend the money to invest in a cracker, it’s yours until you choose to sell it. Collectors may yearn for so-called ‘cherished plates’ (the oldest plates, from pre-1963, that might just have a couple of numbers and letters on them), while business owners may want words that relate to their company, and individuals may simply want their first name or nickname to show off their swanky car and its exclusive plates.

Unfortunately, some cherished number plates appear to have been lost without trace, presumably abandoned in a scrap yard somewhere, unnoticed. However, the plate 7 A was sold in 1993 by the DVLA for £8,100, which may seem like a lot, but it is now estimated to be worth up to £300,000. That’s quite a return on your investment! 6 TW was sold in 1995 for £4,400 and could now sell for anything up to £36,000.

Cherished plates are only available from second-hand private number plate dealerships like RegPlates.com; the DVLA does sell private number plates, but only from each new batch of number plates that are produced every year for the car industry. Older plates only exchange hands on the used market, so don’t hold out until the next DVLA sale day (there are up to nine of these every year) if what you are looking for is something older and more distinguished. For those, you need to go to second-hand dealers and see what they have to offer.

Adam Griffiths, personalised registrations manager at the DVLA, offered the Mail a word of caution about buying private registration plates purely as a financial investment:

“People should only buy what they can afford – and not view personalised plates as a sure-fire way to make money. If they go up in value it is a bonus.”

This is true, and there are never any guarantees. It might be worth considering investing in number plates you would be happy to put on your car and use, if they do not go up in value. Perhaps look for something that resembles your name, or your partner or children’s name, or something with a relation to a hobby or passion of yours.

However, we have also seen many occasions where small to medium outlays of money in the first instance have resulted in really impressive increases in value over the years. For example:

How to make money from private number plates

If you have a number plate currently, you can share its details with a site like RegPlates.com to see if anybody is interested in buying it. Even if, at first glance, it does not look very promising, it may well contain somebody’s initials or some other kind of connection, which could make it appealing to somebody else.

The longer term option, which we would recommend, is to buy a personalised number plate now that could return more investment to you in the future.

Short number plates will always be popular, especially with collectors of both number plates and classic cars. Look through the dealer’s choice of cherished number plates to see what is on sale, and how much it is selling for.

It is impossible to predict the future, but try to consider what might be popular in a few years – or even decades – time. 1D would have always been a popular registration plate, but in recent years, the success of the popular boy band One Direction may have increased its value. In a few more years, however, they may be past their prime and their fans may be less interested in memorabilia.

Names (both first names and surnames), place names, and words that encompass people’s hobbies and passions will always be good sellers in the long run. So if you spot a number plate that encompasses KEV or JONE5 or LEE or FI5H, don’t let the opportunity get away!

Avoid plates that break the rules, such as re-selling Q plates.

Always buy from a trusted seller, like RegPlates.com. Ensure the documentation is exactly as it should be so that you don’t run into any legal issues down the line.