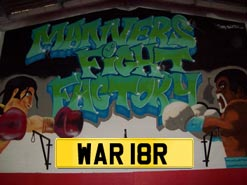 A businessman who bought the No.1 limited edition licence plate in Abu Dhabi for Dh31 million has been sentenced to three years in jail for issuing a dud cheque to the organisers.

The Emirati man had bought the special number plate at an auction last year.

The Abu Dhabi Misdemeanour Court handed down the sentence to the Emirati man after he was found guilty of fraud and issuing a bounced cheque.

Abu Dhabi public prosecution had ordered for the detention of the 32-year-old man after organisers of the auction filed a complaint that he issued them a cheque after buying the number plate, even though he didn't have enough balance in his bank account.

Prosecutors had detained the businessman. He was charged with fraud and issuing a bounced cheque.
And during interrogation, the Emirati admitted to giving the cheque to orginisers despite being aware he didn't have sufficient funds in his account, said prosecutors.

"He said he was planning to re-sale the rare number plate at a profit so he could pay the value of the cheque to the organisers and maintain enough balance in his account," said a prosecutor.

Authorities, however, said one can only re-sale a number plate bought in an auction after one has paid the full amount and that any resale before making the payment is considered illegal.

The auction, which generated Dh99 million, was hosted by Emirates Auction in cooperation with Abu Dhabi Police on November 19, 2016 at Emirates Palace hotel to commemorate the Abu Dhabi Government's Golden Jubilee.

And the Emirati beat several bidders for the coveted plate after starting at Dh1 million. The limited-edition golden jubilee plates all featured the number 50 in the top left corner.

Fifty vanity Abu Dhabi number plates were up for grabs at the Emirates Auction event.