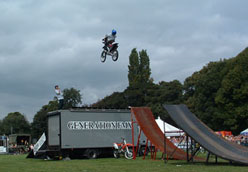 The J71 plate, which was assigned to a vehicle of insignificant value, went under the hammer at Glencoe Auction Rooms in St Lawrence on Wednesday.

Earlier this year another two-digit plate – J27 – became the most expensive registration plate bought at a public auction in Jersey when it went for £73,000 at Glencoe.

Also in the news:

Photos of the grey Volkswagen Jetta car recently began circulating on social media, drawing attention because the custom number plate clearly referred to a six-word profanity.
Traffic police in Mentougou district found and arrested the suspect, surnamed Wei, at his home in the neighbourhood on Tuesday after identifying him through CCTV footage, Sohu Police News reported the next day.
China’s ‘most beautiful’ library ordered to shut over claims it provided pirated material and obscene content

Photos released by police show them arresting him and confiscating the offending car.
The custom licence plate had six Latin alphabet characters instead of the usual three letters and number combination found on standard Beijing car licence plates.

The letters CNMLGB could be taken to refer to a phrase that translates roughly as “f*** your mother’s ****”. Police found that Wei had fixed the fake number plate on top of his car’s original number plate using screws.
Wei has been sentenced to 15 days in prison and was fined 15,000 yuan (US$2,260) for forging a licence plate, in addition to being banned from driving by having all 12 points taken off his licence.

Established For Over 30 Years